Posted on February 28, 2016 by bernadetteinoz 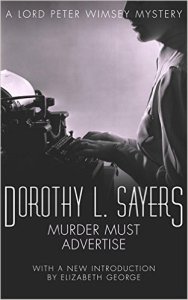 I’ve been participating fairly regularly in the Past Offences Crimes of the Century challenge for over a year now and even though I haven’t enjoyed all the classic crime novels the challenge has prompted me to read I’ve liked enough to wonder why I had previously convinced myself classics are not my thing.

I don’t think I had read any of Dorothy L. Sayers’ books before this month’s MURDER MUST ADVERTISE (published in the all important 1933) but nevertheless it felt all too familiar. For me at least it falls into the category of books that put cleverness and/or puzzliness (I know that isn’t really  a word but perhaps it ought to be) ahead of narrative or character development.

I like a good yarn at least as much as the next person so am not averse to books in which plot takes centre stage but that isn’t really what happens here. The plot can be summed up pretty succinctly: a chap dies falling down stairs at an advertising agency, everyone thinks it’s an accident but for his….I honestly can’t remember now…sister I think but could have been the girlfriend…who somehow manages to engage the services of an English Lord and amateur sleuth to investigate. Much exposition and a fair amount of pompousness ensues. And there’s a drugs angle which fits not at all. But the point of this novel does not appear to be proving there is a dastardly culprit and unmasking him or her as much as it is in tying itself in knots for the sake of the Puzzle.

At first I quite liked the way the book poked fun at the advertising industry (things haven’t changed much in 80 years it seems) but even that was taken too far in the pursuit of clever repartee (I only learned afterwards that Sayers had herself worked in advertising which makes sense of the constant digs though dare I suggest the woman should have seen a therapist rather than air all her angst in public). Still at least the parts of the story in which the agency was the focus were vaguely credible; the parts in which the drug scene of Bright Young Things saw action were laughable. Even though I’ve never been involved in any drug scene current or historical I know this novel wasn’t remotely realistic in its depiction. Why bother is my question? Surely there could have been some other, more credible element for her to include.

And then of course we come to Lord Peter Wimsey. Ugh. He’s not a character he’s a collection of traits. I admit my working class, Australian roots probably predispose me to aversion but it wasn’t his toffiness that annoyed me most (though I did grimace when he was so proud of earning his first money ever). It’s his perfection. I don’t know if this is common for the series but here he plays several ‘parts’ including taking a job at the advertising agency incognito and he is a brilliant actor. He’s also brilliantly clever and women fall at his feet and can turn is hand to anything, including “striding out of his crease like the spirit of vengeance” as the single shining star in the world’s most boring cricket match. If he has a redeeming Achilles Heel I missed it. I realise the impossibly intelligent sleuth is a common feature of crime fiction, especially in this era, but normally there is a foil or some other character to dilute the irritation caused by endless arrogance.

Some of MURDER MUST ADVERTISE’s cleverness is genuine but with the irony being layered on with a trowel the book feels like it is trying way too hard. The characters are under developed and the narrative is lost amidst stultifying detail about dull subjects (catapults and a cricket match that plays out in real time and what does or doesn’t constitute ludeness in advertising in 1933 and many other subjects besides). However I am, naturally, in the minority and commend you to Cross Examining Crime for a more positive and undoubtedly better-informed opinion.

I feel uncomfortable in dismissing Ms Sayers’ work on the basis of one book so is there another book fans would recommend?

3 Responses to #1933 Book: MURDER MUST ADVERTISE by Dorothy L. Sayers