Posted on September 3, 2013 by bernadetteinoz

August started out strongly as far as reading went but during the last part of the month I was spending a lot of time in crowded, noisy waiting rooms and was unable to concentrate on the written (or even spoken) word for large chunks of time. So while I read 9 books for the month, only two of those were after the 15th. 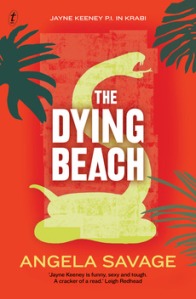 My standout read for the month was Australian author Angela Savage’s third novel featuring ex-pat Aussie Jayne Keeney who now lives in Thailand where she works as a private investigator.  In THE DYING BEACH Jayne and her boyfriend and business partner Rajiv are on holiday in the resort town of Krabi and they learn that Miss Pla, the tour guide who they’d enjoyed so much a couple of days earlier, has been found dead. Although considered an accidental drowning Jayne can’t imagine the woman she met, an accomplished swimmer and diver, dying in that way and so looks into the case which puts Jayne and Rajiv on a collision course with some very unsavoury characters.The book has it all: an exotic, evocative setting; terrifically drawn characters including good guys you can’t help but like and a story that manages to be thought-provoking and an edge-of-your-seat ride at the same time. I love this series.

The rest of my reading was pretty good too

I answered the Book Q & A which was good fun and had a great discussion about my lack of reading of male American crime writers. I’ve got a good list of recommendations out of this – now I just need some quality reading time.

Progress towards my book-ish goals

Hope your August reading was enjoyable for you. Did you have a favourite book? Do you notice themes or “odd” things about your reading sometimes (such as me realising I don’t read many American male writers)? Do you try to correct or not bother as long as you’re enjoying your reading?

This entry was posted in books of the month, list. Bookmark the permalink.