After seeing several responses to this Q & A about reading habits and bookish likes and dislikes – including Angela’s and Margot’s – I couldn’t help but start answering the questions myself. I suspect it’s a moment in time kind of thing, at least some of my answers would be very different if I answered again in 6 months but for the moment, without putting too much angst into each answer, these are my thoughts.

What are you reading right now?
I’m about half-way through Amy Espeseth’s SUFFICIENT GRACE. The author was born in the US but has lived in Australia for a decade or so. The book is set in America and is narrated by a young girl who is growing up in rural Wisconsin as part of a fairly isolated, Pentecostal community. I am a sucker for books featuring religion and the hardship it brings to many. I don’t know where the book is going – which is fine as I am enjoying the ride (though I have learned more about hunting than I probably ever wanted to know). I love the language of it though.

Do you have any idea what you’ll read when you’re done with that?
I recently discussed the fact I tend not to read many American male crime writers. Among the suggestions given to me more than once was Daniel Woodrell’s WINTER’S BONE and the inclusion of it as a much loved crime novel at Petrona Remembered this week sealed the deal. It’s next up.

What 5 books have you always wanted to read but haven’t got round to?

What magazines do you have in your bathroom/lounge right now?
I haven’t subscribed to a magazine since THE BULLETIN went bust but there’s usually a copy of The Big Issue floating around

What’s the worst book you’ve ever read?
Gabriel Marcia Marquez’ LOVE IN THE TIME OF CHOLERA. I guess it proves me to be the intellectual lightweight I surely am but I didn’t understand most of it. My then new sister-in-law gave me the book and I worried for months how to tell her I didn’t like it. Happily book disagreements (of which there have been many since) have not prevented us from becoming firm friends.

What book seemed really popular but you didn’t like?
Tim Winton’s CLOUDSTREET. It is officially Australia’s favourite novel but I am at best ambivalent about it.

What’s the one book you always recommend to just about everyone?
There are so few books I think perfect for everyone, but the closest would probably be Geraldine Brooks’ YEAR OF WONDERS. That said I’ve bought 5 copies of Favel Parrett’s PAST THE SHALLOWS as gifts since reading it last year so that might come close.

I can’t think of a crime novel I would recommend universally – so many people are genre snobs it’s not worth the hassle.

What are your three favourite poems?

Where do you usually get your books?
This year one of my goals has been to only buy books in Australia (rather than from overseas suppliers which are much, much cheaper but which, of course, contribute zip to our local economy and community). But buying in Australia is expensive so I’ve used the library a lot more this year and have made my few purchases from Dillons (a fabulous local inde book seller which is literally around the corner from my house) and Booktopia (an Australian online store that sells physical books and eBooks for everything but kindle). My only concession to buying books overseas is that I get my audio books from Audible in the US. There’s no Australian equivalent.

Where do you usually read your books?
Anywhere. Everywhere. To borrow a term from my day job I have in-built redundancy for when I leave the house – always take my iPod nano with a few audio books on it, a physical book and at least one of my eReader, smart phone or iPad for accessing eBooks. I read or listen while walking, on the bus, in waiting lounges, on long queues, in café’s and occasionally while in totally pointless meetings (the iPad is great for this – you look like you are really paying attention)…At home I have a particularly comfy reading chair.

When you were little, did you have any particular reading habits?
Our family trips to the local library each Saturday morning were a highlight of my childhood. I was the youngest person ever to have my own library card there and I doubt I ever borrowed less than the maximum number of books allowed.

What’s the last thing you stayed up half the night reading because it was so good you couldn’t put it down?
Just after I learned he had died I picked up Leighton Gage’s DYING GASP one weekend morning and allowed myself an hour’s reading before chores and some work. I didn’t move until I finished the book early that same evening

Have you ever ‘faked’ reading a book?
Thomas Hardy’s TESS OF THE D’URBEVILLES. It was sooooooooooooo dreary, and it came just after I plodded through THE GRAPES OF WRATH for year 12 English (did they want us to commit suicide en masse?). I read the cliff notes and bullshited well enough to get a pass mark on the essay (of course it’s just possible my teacher knew and forgave me – she was pretty smart). 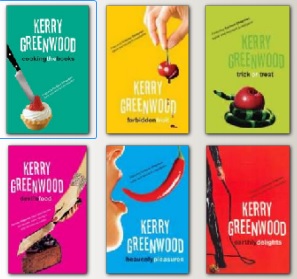 Have you ever bought a book just because you liked the cover?
Not that I can remember. A cover will make me pick a book up but I have to know more about it before laying out hard cash. I love the way the set of Kerry Greenwood’s Corinna Chapman novels looks all together…the bold colours and single images (which are relevant to each tale) are terrific. And they don’t look like anything else on my shelves

What was your favourite book when you were a child?
Enid Blyton’s THE NAUGHTIEST GIRL IS A MONITOR. About a girl who gets into lots of trouble without really meaning to and went to midnight feasts at her boarding school. My mother would say the first part of that was uncannily biographical whereas I wanted the boarding school midnight feasts to become so.

What book changed your life?
Agatha Christie’s DEATH ON THE NILE gave me the yearning for travel that prompted me to get a swag of crappy part time jobs as soon as i was old enough so I could save up for my first overseas trip. Travel wasn’t something people in my family ever did before.

What is your favourite passage from a book?
I love this passage from the opening chapter of Adrian Hyland’s GUNSHOT ROAD. The main character of the novel is attending an Aboriginal initiation ceremony

The town mob: fractured and deracinated they might have been, torn apart by idleness and violence, by Hollywood and booze. But moments like these, when people come together, when they try to recover the core, they gave you hope.

It was the songs that did it: the women didn’t so much sing them as pick them up like radio receivers. You could imagine those great song cycles rolling across the country, taking their shape from what they encountered: scraps of language, minerals and dreams, a hawk’s flight, a feather’s fall, the flash of a meteorite.

The resonance of that music is everywhere, even here, on the outskirts of the whitefeller town, out among the rubbish dumps and truck yards. It sings along the wires, it rings off bitumen and steel.

Who are your top five favourite authors?
I’ll list five of the many, in alphabetical not preference order

What book has no one heard about but should read?
EMERGENCY SEX AND OTHER DESPERATE MEASURES by Kenneth Cain, Heidi Postlewaite and Andrew Thomson. It’s a non-fictional account of how broken the United Nations is. Thinking about it still makes me feel angry, impotent and guilty all at once. Especially as, essentially, nothing’s changed. We’re still sitting idly by why thousands die needlessly and painfully.

What 3 books are you an ‘evangelist’ for?

What are your favourite books by a first-time author?

What is your favourite classic book?
Jane Austen’s SENSE AND SENSIBILITY

I haven’t been officially tagged for this meme so don’t feel in any way obliged to tag anyone else. But feel free to respond in your own way either in the comments or at your own space.

This entry was posted in list, memes and challenges. Bookmark the permalink.