Knowing I was heading into a period of very limited internet access combined with little time for ‘proper’ reading I wanted to load my iPod nano with audio books to keep me company while I packed, moved and lived amongst renovation chaos. I’m still living amidst semi-chaos (minor by most standards I’m sure but I’m someone who likes order and things being in their proper place so for me it is stressful) but my internet connectivity is back to normal and I have carved out some space for the important things like reading and blogging about reading. I’ve not the time nor the recall to do proper reviews of all the books I listened to but here are some vague thoughts about them all. I am newly grateful I am one of those people who can absorb books in this format. I know plenty of people who can’t do so and I would have been a lot more curmudgeonly in recent weeks if I hadn’t been able to escape with the help of some terrific storytellers. 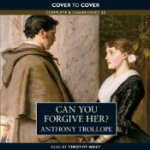 At nearly 30 hours in length CAN YOU FORGIVE HER?, the first of Anthony Trollope’s six Palliser novels, certainly achieved the goal of providing many hours of listening and narrator Timothy West was superb. I think I’d have struggled to wade through some of the minutiae in a print version of the book (It takes nearly an hour to describe a fairly unremarkable picnic for example) but even if that were not the case I feel somewhat privileged to have had the tale told to me in this way. Set contemporaneously in the early 1860’s the book tells the tale of Alice Vavasor and her various engagements and disengagements (it is this series of entanglements which the reader is asked to forgive) in parallel with the stories of two other women: a wealthy widow with two suitors competing for her affections and Lady Glencora who is married to an up and coming politician, Plantaganet Palliser, but who pines for her first love. It’s an easy read…allowing the reader to become lost in the gorgeous language and the intimate workings of this rather insular social set. I was struck almost equally by the similarities between modern times and the setting of the book, including most people’s obsession with gossiping about others and a focus on things like money and appearance, and the vast differences, particularly with respect to the opportunities for women. Although I’m sure my attention waned a little at times I did become thoroughly involved in the lives of Alice and her set and will let Timothy West tell me the rest of the stories at some point in the future.

Regular visitors to the blog will not be surprised to learn that after all of this Victorian goodness I felt compelled to return to the trusted ground of crime fiction. I started with NJ Cooper’s FACE OF THE DEVIL in which a young girl is stabbed to death on the Isle of Wight, seemingly by schizophrenic teenager Olly Matken who claims to have been protecting her from the devil. DCI Charlie Trench seeks the help of psychologist Karen Taylor to oversee interviews with the boy but she is soon drawn deeper into the case as she tries to determine his level of responsibility. I found the book a bit slow to get going but it picked up pace as we see Karen explore the psychological motivations for behaviour by various participants in the small community’s activities. There’s a nice exploration of Karen’s personal life too as she reveals her personnel connection to the island and undergoes some soul-searching about her personal relationships. A solidly decent read by this new-to-me author and narrator Julia Franklin did a very nice job. You’ll find a more in-depth review of this book at the always excellent Petrona.

Next up was Ann Cleeves’ SILENT VOICES, the fourth book to feature DI Vera Stanhope who investigates crime in Northumbria, this time finding the body herself as she participates in a doctor-enforced health regime at her local gym. I will have more to say about this book soon (when I’ve watched the corresponding TV adaptation) but for now I’ll say I’m sure my enjoyment of the story about murky pasts was only enhanced by the narration of actress Charlie Hardwick who really did become Vera in my head. Check out full reviews at Euro Crime and Mysteries in Paradise for more details.

In Mo Hayder’s GONE, which I selected because it won one of the big awards this year (I can’t remember which one) DI Jack Caffery is called to a car-jacking which takes on sinister overtones because a young girl was in the back seat of the car when it was taken and as time drags on it becomes clear she won’t be returning of her own volition. This is one of those twisty turny police procedurals that really shows off the genre at its best though for me the segments we spend with Flea Marley, head of the Police diver squad who spends a good portion of the book alone in an underwater cave are a little less successful (a little bit too much ‘woo woo’ for my personal taste but probably not for most people). Once again check out Petrona for a full review.

Dick Francis’ SMOKESCREEN and TRIAL RUN found their way into my listening selection because I nabbed them while on special and Francis books narrated by Tony Britton are among my favourite comfort reads. These two books at least allowed me to briefly leave virtual Britain as SMOKESCREEN mostly takes place in South Africa where the interchangeable Francis hero, a movie actor in this instance, is looking into the poor form of some horses owned by an old family friend while in TRIAL RUN a different (but remarkably similar) hero heads to Moscow to determine if it will be suitable for a member of the British Royal Family to take part in the impending Olympic Games. In both books our protagonists are suitably heroic, surviving a plethora of near-death experiences between them (including both extremes of weather as one chap is handcuffed to a car in the baking African sun while the other is hurled into a near-frozen river on a wintry Russian night. While I might gently scoff at the ‘sameyness’ of the books these two were entertaining enough for my purposes, offering Francis’ trademark research woven expertly into his adventures and satisfying (if predictable) endings.

I wouldn’t normally read quite so many police procedurals in such a small space of time, especially not all set in Britain, but the books available in audio format tend to be the big name English and American authors and at the time I made my selection none of the American selection leapt out at me. Got any good audio book recommendations for me now that my iPod is almost empty?