Posted on October 19, 2011 by bernadetteinoz 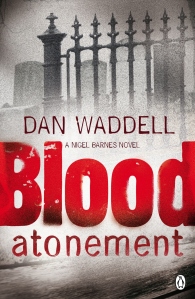 Blood Atonement is the second book in Dan Waddell’s series featuring English genealogist Nigel Barnes, who once again teams up with police who are investigating a current crime which has links to the past. The book opens with police called to Queen’s Park, London where Katie Drake has been gruesomely murdered while her 14-year old daughter appears to be missing. Not sure at first whether she has been taken by the killer or indeed is the killer the team soon find similarities to an earlier case and their investigation then requires they understand more about the family background of Katie Drake, whose past seems something of a closed book.

There will come a point at which the premise of this series, (genealogist working with police) will become unbelievable, but with only two books so far the twist on police procedurals still feels fresh. Waddell weaves the historical element into the present-day story well especially well here, giving a plausible motivation for the killings that doesn’t rely on serial killer-style fetishism. He also does a good job incorporating genealogical aspects of the narrative into the main narrative and (this being one of few subjects I know something about having been an archivist in a former life) gets it all right.

The DCI heading up the case is Grant Foster who was injured rather badly in the events of The Blood Detective and this is his first case back after a long recuperation. He is still feeling the aches and pains (and is meant to be working to a rather stringent return to work plan) of his injuries but is keen to get back into the swing of things. As a way of showing Foster is not quite the full-time curmudgeonly grump he seems in the second half of the novel he meets a young boy who is in potential danger and, in spite of himself, becomes quite attached to the lad. This is a sweet yet quite funny thread. Sergeant, Heather Jenkins continues to work together with Barnes though the personal relationship between the two that appeared to be going somewhere at the end of the first book has gone cold when this one opens. Barnes is not particularly happy about this but he puts it aside to get the job done and the two dart around the country (and the globe) happily enough. There’s a nice tangent in which Barnes is asked to appear in a pseudo-documentary style TV show that adds a bit of levity to the growing body count.

I like the combination of history and genealogical investigation in this series and the particular emphasis of this book (which I’m deliberately saying nothing about to avoid spoilers) is one of those subjects I always enjoy seeing explored. All the elements of a good who (and why) dunnit come together well here with plenty of suspects, a handful of red herrings and even a crazy old lady in an asylum. Jolly good reading.

Not the author’s fault: I read this via the Kobo app on my iPad which turned out to be a fairly frustrating experience of which I will speak further in a different post. Definitely my least favourite eReading experience to date but I tried very hard to keep my nasty thoughts about that distinct from my thoughts about the book itself.

I reviewed the first book in the series, The Blood Detective, last year

My rating 3.5/5
Publisher Penguin [2009]
ISBN 9780141040998
Length I don’t have a clue because the daft Kobo app is more interested in tweeting about my reading than telling me how many effing pages there are in the effing book (not that I’m annoyed or anything)
Format eBook (ePub)
Source I bought it

This entry was posted in book review, Dan Waddell, England. Bookmark the permalink.