LINE OF SIGHT by David Whish-Wilson

Synopsis: In Perth, Western Australia in 1975 Ruby Devine, brothel madam and mother of three, is shot and killed in her car by the side of a highway. Some months later there has been no arrest and, some would argue, no proper investigation to speak of. Superintendent Frank Swann of the WA Police has accused his fellow officers of the crime and its subsequent cover up. Although his accusations have led to the establishment of a Royal Commission (the highest form of official enquiry possible in Australia) Swann’s life and the lives of his family are at real risk. In fact his oldest daughter has disappeared and Swann is fairly sure she is dead at the hands of the same cops who killed Ruby. Unfortunately he doesn’t have enough evidence, or enough living witnesses, to put them away.

Review summary: The book captures its time period and its setting beautifully. The language, the cultural and political references, the policing methods, the isolationist stance that Western Australians had (still have?) are all ably shown in a myriad of small ways and I really did feel transported back in time. The many scenes of utter desperation and despair in the book are, for the most part, balanced out by the inclusion of Swann’s perseverance and the Royal Commissioner’s slowly dawning strength to provide a really satisfying and highly recommended read.

The full review is at Fair Dinkum Crime, My rating 4/5

THE MAYA CODEX by Adrian d’Hagé

Synopsis: The book opens in Vienna in 1937. With Hitler about to take control of his native Austria, Jewish University Professor Levi Weizman reluctantly agrees to accompany a Nazi expedition to the Guatemalan jungle. The Nazis are looking for proof of the superiority of their Aryan heritage, while Weizman is looking for a document believed to have been written by the Mayans many centuries ago. When the book jumps forward to the present day Levi Weizman’s granddaughter Aleta is following in the family tradition of archaeology. She too is searching for the fabled Mayan codex, purported to be a warning about a catastrophe that will befall the world in 2012. But she has made some powerful enemies in the CIA and the Catholic Church. CIA Agent Curtis O’Connor is sent to kill her but decides instead to join her search for the codex

Review summary: Overall The Maya Codex is an intelligent thriller that presents a plausible (if far-fetched) doomsday scenario that incorporates a rather chilling amount of credible details about our recent and not-so recent history.  The characters are pretty standard fare for a thriller but the book does offer some insight via an overall theme exploring the corrupting influence of knowledge and power on a collection of unlikable individuals. If clever, high-speed romps are your thing I can recommend this one.

The full review is at Fair Dinkum Crime, My rating 3.5/5 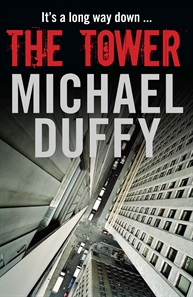 THE TOWER by Michael Duffy

Synopsis: In Sydney’s CBD they’re building the world’s second-tallest building. One night a woman falls from The Tower and happens to land on a police car below. By the time Detective Sergeant Jon McIver and Detective Senior Constable Nicholas Troy of the Homicide Squad get to the scene it has been determined she which floors she could have fallen from and is a systematic search is underway. Although they are told to wait for the search to be completed McIver disappears into the upper floors and when he doesn’t return Troy becomes worried and goes after him, a little worried about McIver’s tendency to drink while on duty. McIver and Troy, along with the construction site’s security manager Sean Randall, do have an encounter that leaves one of the three injured. In the subsequent investigation the woman is eventually identified and the list of her possible killer(s) grows quickly.

Review summary: This first novel in a series introduces is fairly unique character for crime fiction in Nicholas Troy. He’s young-ish (early 30’s), doesn’t have the demons that many of the most famous fictional crime-fighters have and is not yet as jaded or set in his ways as an older man might be and is still trying to work out the kind of man, policeman, father, husband he is or wants to be. The book also has several other really interesting male characters, a first-rate depiction of Sydney and an almost true-crime sensibility. It’s well worth a read.

The full review is at Fair Dinkum Crime, my rating 3.5/5 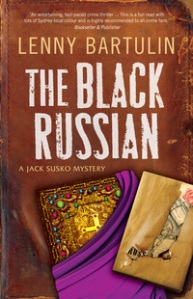 THE BLACK RUSSIAN by Lenny Bartulin

Synopsis: Jack Susko is a second hand bookseller with major financial problems. When he is delivering an old art catalogue to a customer the gallery belonging to said customer is the subject of an armed robbery. In addition to stealing the contents of the safe the thieves take off with the contents of Jack’s bag which, of course, was one of the few valuable items he owned (a rare first edition of an Ian Fleming novel that he was on his way to a buyer with). This turns out to be only the beginning of Jack’s woes as he reluctantly finds himself the centre of attention for several competing groups of evil villains.

Review summary: the book’s sub-genre is hard to pin-point but it’s somewhere in the vicinity of black comedy with hints of satire and old fashioned hard-boiled detective caper thrown in. The character of Jack is entirely believable and he’s likeable too and I would recommend this to anyone who wants a book that has a definite Australian feel to it (the setting, the people and the attitude are spot on). Of course if you just want smart wisecracks and a slightly absurd romp it’ll fit that bill nicely too.

The full review is at Fair Dinkum Crime, my rating 3.5/5 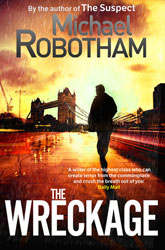 THE WRECKAGE by Michael Robotham

Synopsis: In Baghdad we meet Luca Terracini an American journalist investigating a series of bank robberies that no one else seems terribly interested in, despite the enormous sums of money involved and the sheer number of robberies. Meanwhile in London when retired policeman Vincent Ruiz witnesses a young girl being hit by her boyfriend he plays the good Samaritan; a decision he regrets when one of his most precious keepsakes goes missing. At the same time the wife of an English bank executive reports her husband missing. In a complex but thoroughly riveting plot these disparate stories eventually intertwine in an all-too credible tale of corruption on a grand scale and the lengths people will go to hide it.

Review summary: Although it features a couple of characters familiar to readers of his earlier novels, Michael Robotham’s seventh book is something of a departure from its predecessors; more political in content and also more of an international thriller. It is a very current book, delving into such issues as the current state of play in Iraq so many years after the war began, the fallout from the global financial crisis on the world’s banking institutions, and the bizarre combination of hard slog and good luck required to gather intelligence about terrorists and their evil plans in these uncertain times. While the story is certainly fast-paced and full of action and suspense, Robotham has managed to stay clear of sensationalism, develop engaging characters and providing a more thoughtful and thought-provoking book than the average thriller. It’s probably my favourite of Robotham’s books.

The full review is at Fair Dinkum Crime, my rating 4/5 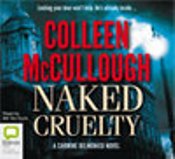 Synopsis: Taking place throughout 1968 this is McCullough’s third novel to feature Police Captain Carmine Delmonico and his team who battle the evil doers of Holloman, Connecticut. The book opens with a brutal rape which the victim, Maggie Drummond, reports to Police although the rapist warns her not to. What soon becomes clear is that Maggie was not the first victim of this rapist, merely the first brave enough to come forward. After publicity it transpires that a number of have been raped in an exclusive suburb. However, even having a string of earlier cases from which to garner evidence, the crime spree is not solved quickly. Part of the reason for that is the Holloman PD is stretched to the limit with damaging vandalism, a high-profile kidnapping and the discovery of a weapons cache at a local high school on their plates at the same time as the vicious rapes.

Review summary: I am a huge fan of Colleen McCullough and her writing (as I wrote about upon reading her second book in this series) but I’m afraid this book just didn’t work for me on many levels at all. The historical setting has too many modern sensibilities, there are far too many characters for any to be depicted in any depth and the plot is jam-packed with threads of which many are downright silly. Overall I found it superficial and pretentious, with only a few hints of the humour and adventurousness that I enjoyed about its predecessor.

The full review is at Fair Dinkum Crime, my rating 2/5