Posted on January 2, 2010 by bernadetteinoz 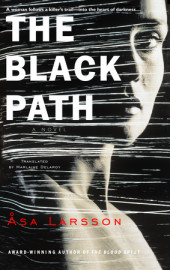 One night the body of a woman is discovered in an ice fishing hut near Kiruna in northern Sweden. Inspector Anna-Maria Mella and her colleague Sven-Erik Stalnacke soon discover the body is that of Inna Wattrang, a senior executive with Kallis Mining company but they can’t so easily learn who killed her. Was it her brother Diddi? Her boss Mauri Kallis? One of the many men she was intimate with? Or something to do with the company’s dealings in strife-torn Uganda? The police meet a wall of silence when trying to interview Inna Wattrang’s family and associates so can only piece together the case slowly.

Åsa Larsson creates memorable characters like few other people I’ve read. In this book, the third of what Larsson says is a 6-book series, there are half a dozen people who slowly but intriguingly reveal themselves over the course of the book. There’s Rebecka Martinsson, the main protagonist of the series, who is struggling with depression after the events of the previous two books. At the beginning of the book she is institutionalised and throughout the story she continues to struggle in a very realistic way. Each of the other characters also displays their own psychological problems including Inna’s brother Diddi whose dependence on drugs makes him increasingly erratic. Mauri Kallis and his sister Ester had separate but equally fractured upbringing and this plays out in the disturbed adults both have become. Somehow Larsson made me feel as if I were inside the heads of this disparate and disturbed group of people and their different perspectives on their worlds were utterly fascinating.

For 90% of this book the plot builds at a steady pace with details being teased out gently as each person’s story adds another morsel. Unfortunately the final 10% reads a bit like someone bought Michael Bey in to finish it off and the high-action sequences offer a jarring conclusion to an otherwise excellent story. It’s not that I’m opposed to thriller-style endings but sometimes they are out-of-place.

I certainly don’t subscribe to the view that all Scandinavian crime fiction is bleak but this is one title that does fit that category. Even the usually optimistic and upbeat Anna-Maria Mella has her share of gloomy moments in this book and I have to say it was nice to be able to walk out into the bright Australian summer sunshine after finishing. However, don’t be turned off by the dark nature of this superbly translated tale because it contains some of the finest characters you’ll read: you probably won’t like them all but I doubt you’ll forget any of them in a hurry.

The Black Path has been reviewed perceptively (as always) by Norman at Crime Scraps, Barbara at Reviewing the Evidence (who seemed to share the exact same reactions as I did to both the good and not-so-good aspects of this book) and Maxine at Euro Crime

This entry was posted in Asa Larsson, book review, Sweden. Bookmark the permalink.

7 Responses to Revew: The Black Path by Asa Larsson